Ethiopia boasts an extremely diverse flora including more than 1,000 species of woody plants (125 of which are endemic) and 736 types of grass.

At Bale and Simien massifs open habitat typical plants are – soft green guassa grass, ericaceous heathers and spectacular palm-like giant lobelias. Striking plants are the ‘red-hot-pokers’ of the genus Kniphofia. The only rose species indigenous to Africa, the Ethiopian rose (Rosa abyssinica). This rose is a thorny deciduous shrub with fragrant creamy flowers, is common in the highlands around Bale.

The most biodiverse habitat in Ethiopia is closed canopy forest – Harenna Forest in the southern slopes of the Bale massif. The extensive montane forests protected in the Biosphere Reserves of the western highlands, which are also from where coffee originated.

A characteristic tree of highland areas is the Abyssinian juniper (Juniperus procera). Other common highland trees include the African Olive (Olea Africana).

The larger rivers and lakes of Ethiopia support strips of riparian forest – in such habitats you’ll often find large buttressed trees of the genus Ficus. The seasonal fruits of fig trees frequently attract large numbers of monkeys and birds.

The Rift Valley and others below an altitude of around 2,000m naturally support a typical African cover of wooded savanna. That is often dominated by thorn trees of the Acacia family.

About 30 % of the country is classified as arid or semi-arid, most if it in the southeastern Somali border area and the Danakil Depression.

Around 15 % of Ethiopia’s land is under cultivation and 50 % is used as pasture. Most farmland consists of private smallholdings used to produce tef (the endemic grain used to make injera), sorghum, millet and corn. Cash crops include coffee and flowers.

So, and now Adventures in Ethiopia lets you see what kind of plants you can find in Ethiopia – 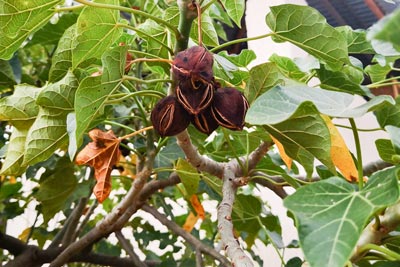 Jatropha is an oil-bearing plant growing in tropical and subtropical regions of the world within 30°N and 35°S latitudes. Physic nut or Ayderkie (Amharic) is a bush or small tree adapted in the drier and warmer areas of Ethiopia. It endures moisture stress by dropping its leaves during dry period and flourishes when the rain comes. The plant has received enormous attention of the government as raw material for biodiesel industry. It’s use in hedges and in the soap industry. 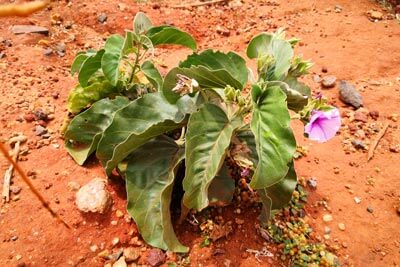 The pink morning glory – has similar heart shaped leaves that are a rich green. The plants bloom in clusters of pink flowers all spring and summer long. As the name suggests, the blooms fade as the sun warms them, just like morning glories – but they are impressive while they last, blooming in large clusters at the ends of the tall branches. 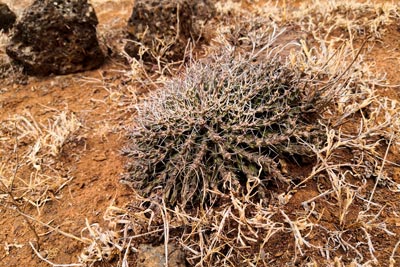 Spreads Branch Spurge – is a dwarf spiny, perennial, succulent shrublet up to 50 cm in diameter and 15 cm tall, but usually smaller, with a fleshy root merging into a short thick rootstock (often called a caudex). The upright branches are up to 15 cm long and 1 cm in diameter and spread in the upper part. Their surface is dark green with brighter longitudinal stripes. The flowers (cyathia) are reddish.

Nicotiana glauca is a species of wild tobacco known by the common name tree tobacco. It grows to heights of more than two meters. Tree tobacco is native to South America but it is now widespread as an introduced species in Ethiopia as well. The Cahuilla Indians used leaves interchangeably with other tobacco species in hunting rituals and as a poultice to treat swellings, bruises, cuts, wounds, boils, sores, inflamed throat, and swollen glands. Contains the toxic alkaloid anabasine. Ingestion of the leaves can be fatal. It is being investigated for use as a biofuel. 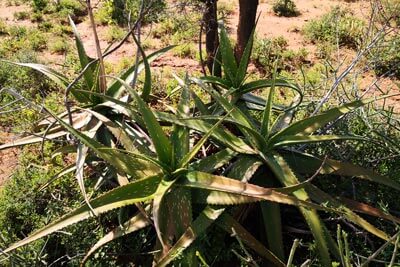 There are 46 species of Aloes in Ethiopia in which about 66% of these Aloe species are endemic to the country. They are distributed in all of regions. Aloes are very important source of traditional medicine in Ethiopian communities to treat different ailments. In addition Aloes are used in soap production, jute sacks production, anti-microbial activities in cotton fabric, as thickening agent, degraded land rehabilitation and source of food for animals. 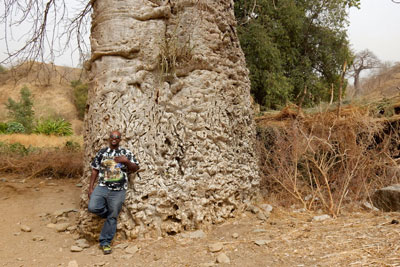 local name Baobub (Amargna), Baobab (English). The baobab is a deciduous tree with a thick trunk, diameter may reach 8m, girth 20m and height 25m. The unpleasant smelling nectar attracts pollinating fruit bats. The fruits are very big (15 – 22cm), hairy, yellow-brown capsules, hanging on long stalks on the bare tree. Fruits are edible. Everybody collects and eats the fruits. Shepherds mix the white powder-like inside of the fruit with fresh milk from their animals inside the fruit cover and drink it. 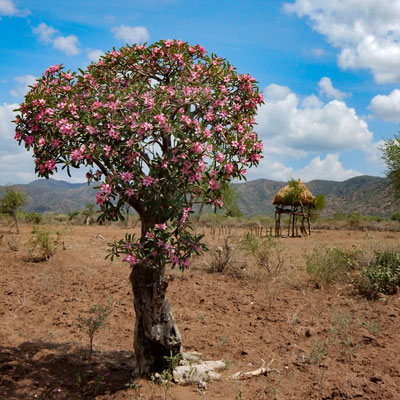 the lockal name is desert rose or impala lily considered as a medicinal plant belonging to the Apocynaceae family. Locally, it is known as desert rose and the plant is considered as a slow growing long-leaved plant. It is also known as an ornamental plant and is currently cultivated most humid countries. The plant grows well in rocky and sandy soils. The height of this species is about two to four meters. The flowers and fruits are a special type and they depend on environmental conditions . 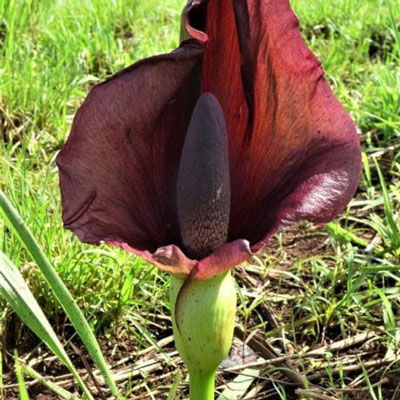 also known as Bagana (Sidamo), is a plant of the genus Amorphophallus. It is native to southern Ethiopia. It is cultivated in Gojjam, and the Semien Omo Zone and Konso special woreda of the Southern Nations, Nationalities and Peoples Region. The tuberous roots are harvested and cooked for a long time before eating. 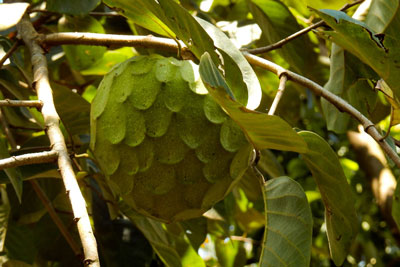 commonly known as African custard-apple, wild custard apple, and wild soursop, is a species of flowering plant in the custard apple family.

Gishta is high in energy, an excellent source of vitamin C and manganese, a good source of thiamine and vitamin B6, and provides vitamin B2, B3 B5, B9, iron, magnesium, phosphorus and potassium in fair quantities. 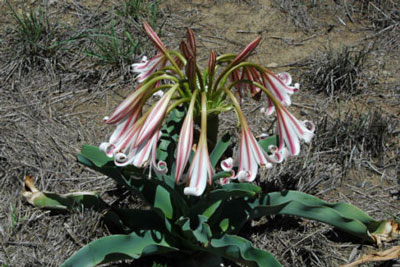 a deciduous bulbous plant species native to Africa. Along with other members of the Amaryllidaceae family, it has been used in traditional medicine throughout southern Africa. The bulbs of Crinum macowanii are used for the treatment of a large number of conditions, with the roots and leaves having some, though far fewer, traditional uses. 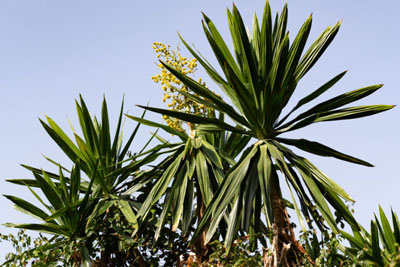 a flowering plant species that is native throughout tropical Africa. It is a slow growing shrub, usually multistemmed at the base, mature specimens reaching 15 m.

a species of flowering plant in the heather family, Ericaceae. There are disjunct populations in Africa including the Ethiopian Highlands. In Ethiopia it is normally referred to as giant heather. 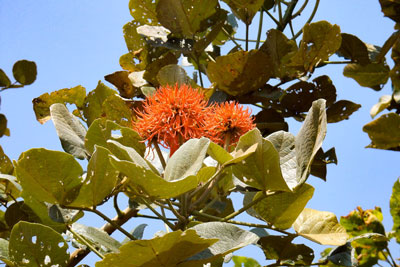 the wood is commonly used for making carvings, stools, drums, mortars, beehives, and sometimes also in house construction. The wood serves as firewood. It is the main planted shade tree for coffee in Ethiopia. It is extensively used as a live fence around homesteads, and is also planted as an ornamental. The flowers provide nectar. The bark is sometimes used as a brown dye for textiles and the sap gives a red colour. The seeds are locally popular for making curios and necklaces.
Erythrina abyssinica is well known as a medicinal plant. The bark is most commonly used in traditional medicine, to treat snakebites, malaria, sexually transmittable diseases, cough, liver inflammation, stomach-ache, colic and measles. 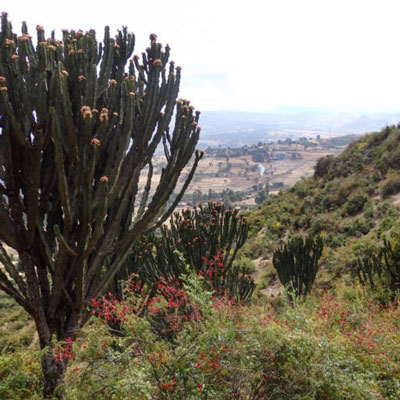 a succulent species of plant in the Euphorbiaceae family. Its Latin name derives from its growth habit, often considered to resemble the branching of a candelabrum. It is known in Ethiopia by its Amharic name – qwolqwal. Euphorbia candelabrum was used in traditional Ethiopian medicine. 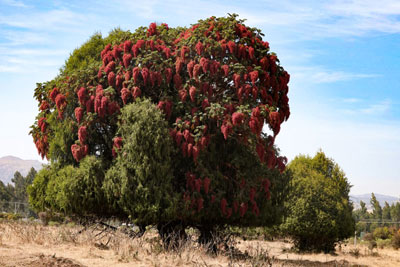 known in English as African redwood, hagenia, in Amharic as kosso. It is a tree up to 20 m in height, with a short trunk, thick branches, and thick, peeling bark. In Ethiopia the dried female flowers are traditionally used as an anthelmintic remedy, especially for tapeworm. Hagenia abyssinica is a good source of firewood, charcoal for furniture, poles, flooring, carving and cabinet. It is also used for erosion control, Trees are employed in soil-conservation activities, shade or shelter. It is suitable for planting in amenity areas. 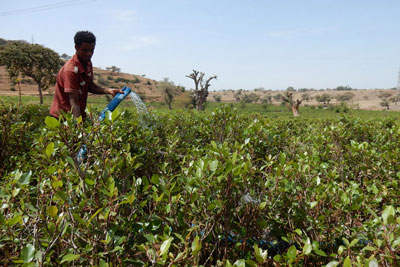 a rapidly expanding perennial crop in the Ethiopian highlands. The leaves of the crop are used for their stimulating effect. Khat production is rapidly replacing cereal production and to some extent coffee production.
Khat is chewed for a stimulating effect that is similar to that of amphetamine. The habit of khat consumption is a deeply rooted social and cultural tradition in Yemen, Ethiopia, Somalia, and Djibouti. Khat consumption can produce alleviation of fatigue, promote excitation, increase confidence, and suppress sleep and hunger. Like coffee and other beverages, khat plays an important role in the social life of people in most parts of Ethiopia. 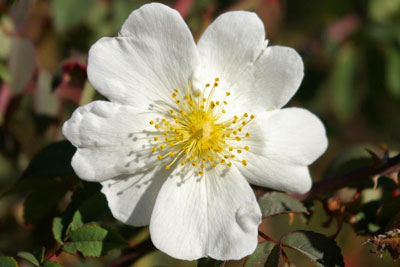 found only in Arabia, Ethiopia, Somalia and the Sudan. This rose is common in upland dry evergreen forests and margins or clearings of forests, in bushland and dry grasslands. It is also found near houses and on river banks. Its edible fruits, high in vitamins, are regularly eaten in times of food shortages. The berries also are used to fight tapeworm in humans. 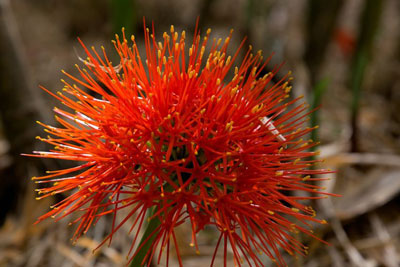 is a species of bulbous plant. It is native to much of southern and eastern Africa: Ethiopia, Sudan, Tanzania, Malawi, Mozambique, Zambia, Zimbabwe, Botswana… Scadoxus puniceus can be found in cool, shady habitat such as ravines and forests, where it is often found in moist leaf litter. Other common names include snake lily, royal paintbrush, African blood lily. 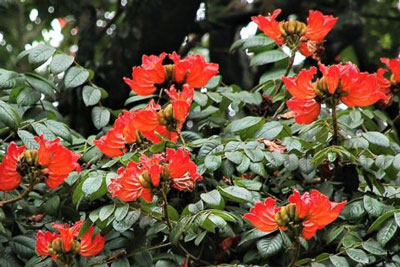 is commonly known as the African tuliptree. The tree grows between 7–25 m tall and is native to tropical dry forests of Africa. This tree is planted extensively as an ornamental tree throughout the tropics and is much appreciated for its very showy reddish-orange or crimson (rarely yellow), campanulate flowers. 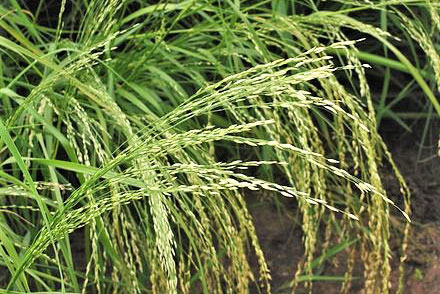 is an annual cereal grass belonging to the family of the Poaceae. The name teff is thought to originate from the Amharic word teffa, which means “lost”. This probably refers to its tiny seeds, which have a diameter smaller than 1 mm. Teff is mainly cultivated in Ethiopia and Eritrea, where it originates. It is one of the most important staple crops in these two countries, where it is used to make injera. 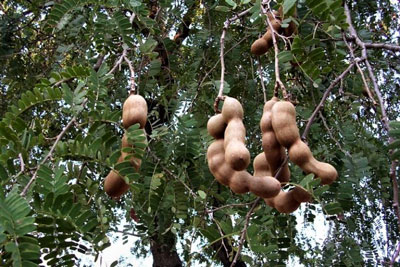 the tamarind is a long-lived, medium-growth tree, which attains a maximum crown height of 12 to 18 metres. The tamarind tree produces pod-like fruit that contains an edible pulp used in cuisines around the world. Other uses of the pulp include traditional medicine and metal polish. The wood can be used for woodworking and tamarind seed oil can be extracted from the seeds. 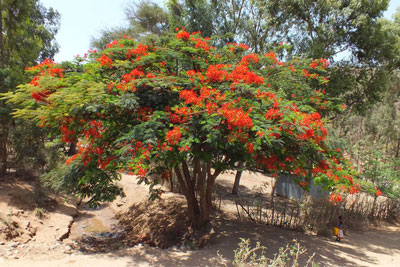 is a tree with an umbrella-shaped crown; it can grow 6 – 18 metres tall. This species would be a fine ornamental for more or less arid places. The flowers are particularly attractive with four petals that are almost white with salmon claws, and a fifth petal that is bright yellow, filaments yellow and anthers orange. 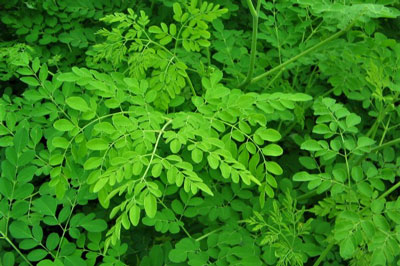 it is now extirpated in the wild in Ethiopia, though still grown there as a crop on the terraces built to conserve water high up the mountains. It is a multipurpose tree producing edible leaves, seeds used for the purification of water, and traditional medicinal products. It is importan as a nutritious vegetable food crop in the terraced fields of Konso.